Skip to content
View cart “Willamette NZ Hops – 100g” has been added to your cart.
Categories

This is truly a hop with a difference.

This variety imparts certain grape-like flavour to the beer and the name arose out of comments made during brewery trials, where the flavour was likened to that of Sauvignon Blanc, coincidentally also grown extensively in the region. Nelson Sauvin is an 11-12% alpha hop, with aroma qualities that are unique.

Described during selection as “breathtaking” Nelson Sauvin has the unique ability to impart a distinctive cool climate white wine “fruitiness”. The complexity of the oils profile has seen selectors stretched looking for descriptors to document this unique new world variety.

A hop that requires judicious application in the brew house, this truly unique dual-purpose variety can be used to produce big punchy Ales as well as subtle yet bitter Lagers.

The fruitiness may be a little overpowering for the un-initiated, however those with a penchant for bold hop character will find several applications for this true brewer”s hop.

Very much at home in the new-world styles such as American Pale Ale and Super Premiums.  This hop is considered by some as extreme and certainly makes it presence felt in speciality craft and seasonal beers gaining an international reputation.

Only logged in customers who have purchased this product may leave a review. 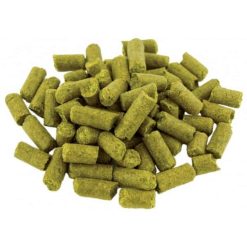